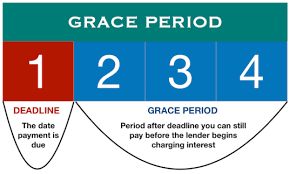 The grace period for a loan is a period during which the borrower does not have to pay any loan installments. This is subject to agreement with the lender.

Typically, grace periods are scheduled before the loan repayment begins. For example, up to two years of full-time university credit can be extended.

Financial institutions offer this option taking into account that the debtor will most likely not receive any income until the completion of the master’s or doctorate.

Likewise, a grace period is reasonable as a condition for a working capital loan for a new small business. Entrepreneurs need time for their business to become profitable.

Cost of the grace period

The grace period has a cost. Although the debtor is not obliged to make any disbursements during this period, this does not mean that interest will cease to accrue.

Therefore, the financial expenses increase as the borrower waits longer to start repaying the money received.

Therefore, the fees are higher if the grace period is longer. Likewise, scheduled monthly payments will be lower if the customer starts repaying the credit immediately.

In addition, it should be noted that there is the possibility of paying only the interest accumulated in each month of grace.

In the following example we can see what was explained in the previous paragraphs. Suppose the bank makes a loan of US $ 15,000 at a monthly interest rate of 3% and with 6 installments to pay (all the same).

If a three month grace period is requested, the repayment schedule would be as follows:

On the other hand, if the grace period were only two months, the total financial charges would be lower. This can be seen in the table below:

Usefulness of the grace period

The grace period is useful in the event of a temporary lack of liquidity. For example, it may be that a person is two or three months away from the repayment of the mortgage loan.

Then, you will probably want to postpone the payment of the first installment of a new personal loan by a quarter.

A grace period is a tool that relieves the borrower in the short term. However, it should be considered an extraordinary resource and not as the rule. This is due to the fact that it involves a higher expense during the entire loan term.

In conclusion, it is advisable to reduce the months of grace as much as possible or simply not to request them.